- We have our own Box Camera Obscura Kit in our shop, also a Lens holder for turning a room into a Camera Obscura, also taking orders for lenses, 1st surface mirrors, etc.


Camera Obscura: Being a darkened chamber with an aperture through which images of outside objects are projected onto a viewing surface.

As well as hiring camera obscura we can offer a unique service designing and building camera obscura. Working to commission we provide a range of products from stand alone garden structures to bespoke installations in existing buildings.

The video link is an interview with BBC South Today which took place on 18th July 2006.

This video is show with permission from the BBC South Today.

The pinhole camera obscura phenomenon was observed and recorded as long ago as the fifth century BC in China. No real changes were made until the thirteenth century when a lens replaced the hole making the resultant image brighter and sharper.


Until the nineteenth century Camera Obscura were used mainly by scientists, artists or as playthings of the rich. At this time however they began to proliferate and appear on seafronts, areas of natural beauty and so forth. Today however the number has dwindled until, especially amongst the youth, few have experienced the wonder that is the Camera Obscura.

Faithfully reproduces the effects that marvelled and amazed past generations in a neat and infinitely portable booth for all to see. 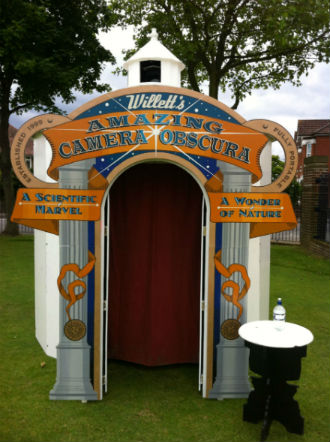